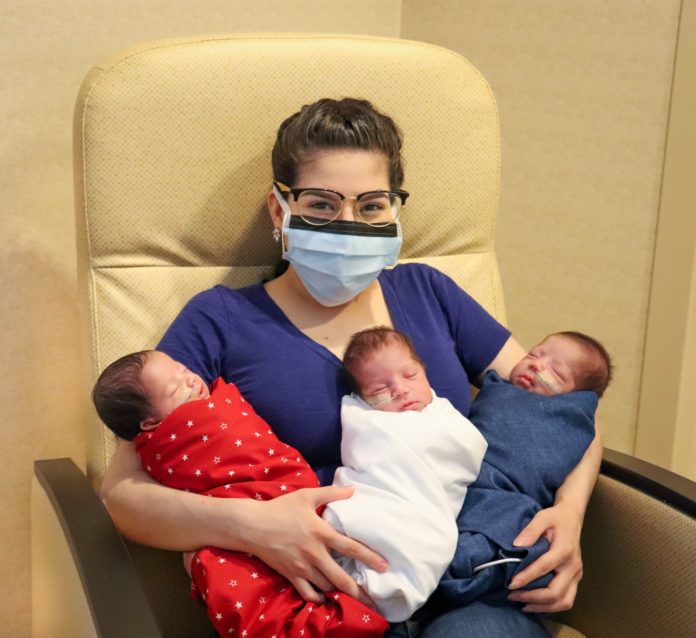 A Texas hospital is highlighting what it says is the remarkable story of a Houston woman who gave birth to triplets after battling the coronavirus for nearly a month.

The Woman’s Hospital of Texas in Houston reported on the woman, identified as Maggie, and her newborns in a Facebook post on Saturday.

“Despite her circumstances, her attitude remained brighter than fireworks on the Fourth of July,” the hospital said of the proud mom.

Maggie was 28 weeks pregnant when she went to the hospital on May 8, the day she was scheduled to be admitted so she and her babies could be monitored in the hospital’s antepartum unit.

As part of the admission, she underwent a COVID-19 test which came back positive two days later.

“While perplexed how she caught the virus since she had been quarantined at home since March 23, as an incredibly kind and selfless person, Maggie’s main concern was everyone but herself,” the hospital said. “She worried about the health of the triplets, her husband and their 5-year-old son, as well as the nurses and physicians caring for her.”

By June 4, she was considered cured after two consecutive COVID-19 tests were negative for the virus.

But on that day, Maggie developed a new complication. She learned during her weekly ultrasound that “Baby A’s” cord was wrapped around her neck.

During labor, Maggie had her mother with her to serve as her one support person because her husband had also tested positive for COVID-19 and still needed to undergo a second test to show he was cured.

A month later, the newborns are continuing to grow bigger and healthier by the day in the NICU, and Maggie, who was discharged, is adjusting to her new routine of visiting the babies every day, according to the hospital.

Maggie was also advising other women who are pregnant and test positive for COVID-19 to not let their fear of the virus overcome their emotions.

“As a mom, you want control, but right now, you have to accept that you don’t have control of everything,” Maggie said. “You have to let other people help you and remember you aren’t alone. Look forward to each day and celebrate every small victory.”