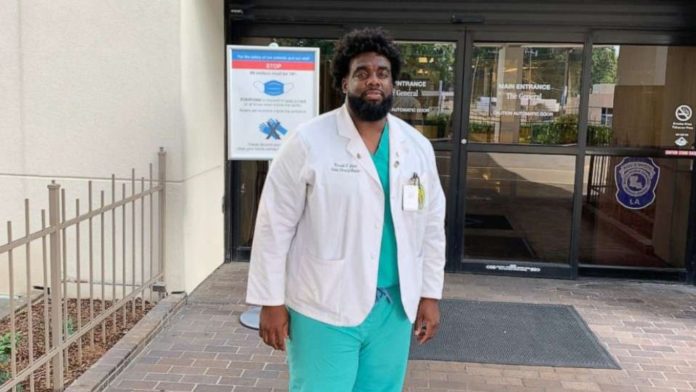 One Black doctor is working on the front lines during the coronavirus pandemic as a medical student at the same facility where he once worked as a security guard.

Dr. Russell Ledet, who worked security at Baton Rouge General Medical Center for about five years, said that he would study medicine on note cards and ask doctors that passed by if he could shadow them.

Ledet said that while many of the medical professionals told him that they didn’t have the time, Dr. Patrick Greiffenstein, the chief surgery resident, was one mentor willing to take him under his wing.

“This is one of those reflective points when you’re trying to understand how far you’ve come and how far you got to go,” Ledet told “Good Morning America.” Ledet, a U.S. Navy veteran, has a Ph.D. in molecular oncology from New York University and is currently enrolled in both the M.B.A. program and medical school at Tulane.

Now he has returned to that exact same facility helping patients while also paving the way for other young students of color hoping to enter into medicine. He calls the opportunity to treat Louisiana patients near where he grew up in Lake Charles a reminder of his “humble beginnings.”

He says that although he’s proud of how far he’s come, the reality of today’s racial climate has produced an ongoing trauma for him and his family, so much so that he says his wife of 14 years encourages him not to leave the house without his white coat in the car.

“My two little Black girls can turn on the TV, once a week, sometimes once a month, and they see a video of somebody who looks like them being murdered and it’s legal,” Ledet said. “These kinds of things are happening and no matter how much education I have, society doesn’t see me as a human.”

To help change that image, the 34-year-old organized an image that went viral of him standing alongside his fellow Black students from Tulane University’s Student National Medical Association while wearing their white coats in front of Whitney Plantation, a former slave plantation turned museum.

“The idea of the photo was to illustrate our presence essentially, and the history behind where we are today,” Ledet told “GMA” in December.

Since that powerful moment, the company The 15 White Coats was born, which provides opportunities for minority medical students around the world. The organization’s long-term goal is to start a high school in Louisiana that prepares kids to become doctors.

Additionally, Ledet says that the photos are now being used as “cultural imagery” so that the next generation knows what’s possible.

“I’m from Louisiana,” Ledet said. “Being from here and understanding a lot of the health burdens and health disparities, I know if I’m not loud about it, then who will be?” 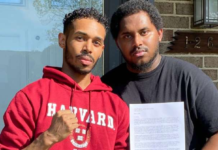