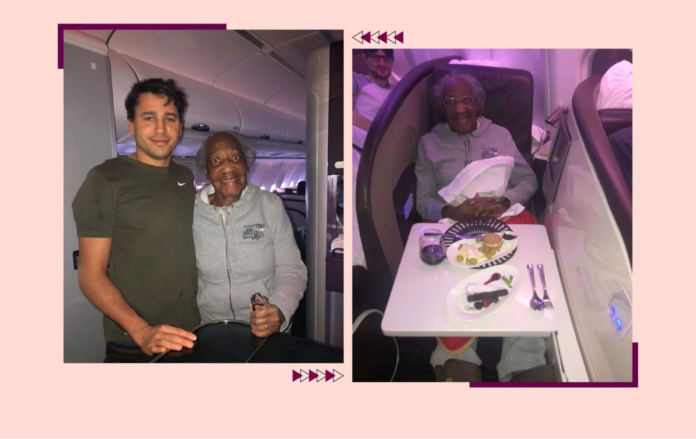 Violet Allison was just getting settled into her economy seat on an overnight Virgin Atlantic flight from New York to London when another passenger walked up to her row and asked her a question she never, ever thought she’d hear.

“Excuse me, would you like to fly first class?” said Jack Littlejohn, to which Allison replied in disbelief, “You’re joking.”

The unexpected journey for Allison was chronicled in a now-viral Facebook post by a flight attendant named Leah Amy. “Of the hundreds of flights I’ve operated, I’ve had the pleasure of looking after footballers, supermodels and some Hollywood movie stars but let me tell you about my two favourite passengers EVER!” she wrote.

In Allison’s retelling of the flight, after Littlejohn offered the trade, he went on: “Yeah, I’ll give you my seat, and you can fly first class,” and have all the amenities that go with it, including dinner, drinks and a reclining bed.

“Do you believe that?” Allison said to the passenger who was sitting next to her. “Do you think I should do that?” she asked, and the woman told her to go for it.

Littlejohn helped collect her bags and luggage, then she followed him to the first-class cabin on the double-decker aircraft, where he showed her to her seat for the seven-hour flight.

Littlejohn “then sat on the row of seats directly next to the economy toilets and never made a peep or asked for anything the rest of the flight,” Amy wrote. “No fuss, no attention, literally did it out of the kindness of his own heart.”

Thousand of messages of support and heart emoji have poured in to support the pair for the kindness and generosity on display. Many made allusions to the fact the story has a connection to the movie “Titanic,” whose protagonists are named Jack and Rose.

Littlejohn had been in New York with his mother and sister for a charity event his brother put on in Times Square called the World’s Biggest Sleep Out, dedicated to ending global homelessness. It was when Littlejohn and his family were leaving back home to Scotland that his mom surprised the siblings with business-class seats.

He said that even though the surprise was nice, it didn’t sit well with him because of the inequality between business and economy class. On the plane, economy passengers had to walk through business to get to their seats in the lower portion of the plane, a comparison Littlejohn called “unhealthy.”

After telling his mom of his intentions to give away his seat, Littlejohn went in search of a worthy passenger. When he saw Allison, he instantly knew.

“You couldn’t have found a sweeter lady,” he said of the 88-year-old.

That’s when he sat on her armrest and asked, “Excuse me, are you traveling by yourself? I’ve got a seat in business, and I’d like to give it to you.”

Amy captured the moment for the world to see in photos. “Violet is 88 years old, has been a nurse in both the UK and over in America. She travels to New York to see her daughter, but hasn’t been able to for a while because of a knee replacement. Her dream has always been to sit at the front, and Jack made that come true.”

Allison says she was well taken care of for the night and credits the crew during the flight with being welcoming and for waving at her throughout. Before the plane landed, Littlejohn went up to check on Allison; that’s when Amy asked if she could take a snapshot with them. When the flight landed, Amy gathered the group together to take a picture of them all. After some chatting, they all said goodbye and went along their way.

Virgin has called it a “lovely story.” Littlejohn says he would like to see the airline go further by offering Allison lifetime business-class seats to New York.

“You should [have] seen her face, when I tucked her in her bed after supper,” Amy wrote.

This article was printed originally in the Washington Post 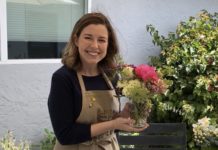 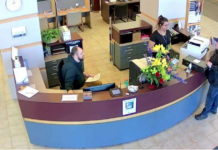